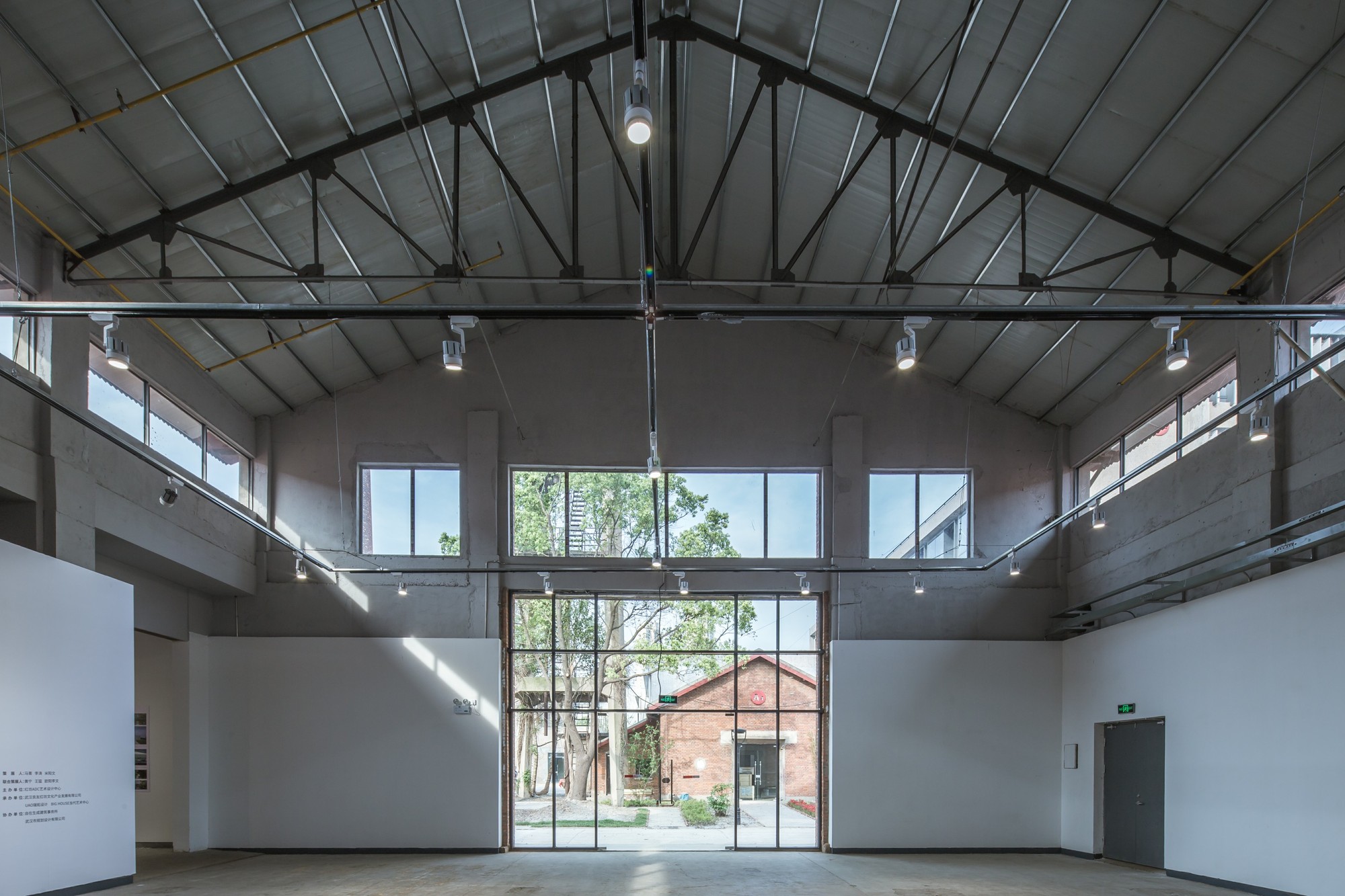 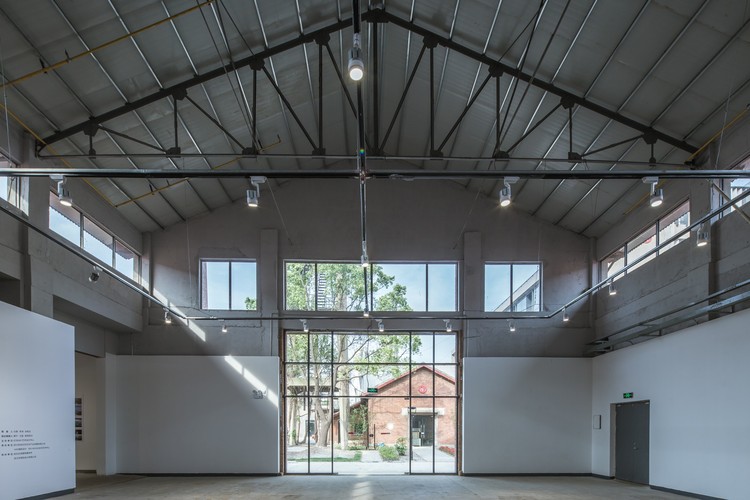 Text description provided by the architects. The predecessor of this project consists of five factory buildings constructed in the 1960s and 1990s. The building is located in the heart of the total park and the transformed function is the public design art center. The main focus is the exhibition hall, which is used to organize all kinds of art and design exhibitions.

The original building is a series of five sloping roof buildings, three of which were built in the 1960s, with the original warehouse function; the structural form is a brick concrete structure, a wooden truss, a red tiled roof, and the height of the ridge of the roof is 7 meters; in the 1990s, the construction group was transformed into a building materials market, and in the middle of the open space of the three buildings, two more factories were built, and the new brick columns were glued with the pillars of the old warehouse, with the roof Steel lattice structure, asbestos tiled roof, ridge height of 9 meters. The difference in height between adjacent buildings is the skylight of the new buildings.

The distance between the horizontal axis columns of the original building is 4 m and the distance between the vertical axis columns is 16 m; when the internal horizontal partition wall of the building is removed, from the horizontal axis there are columns in the space, and the space is cluttered, but from the vertical axis there is an open space, with a panoramic view. The sense of space is very similar to the Great Mosque of Cordoba, Spain. There are several columns. One direction has smaller column spacing, but the other direction has larger space.

The facade of the building is oriented in the direction of the horizontal north axis and the main entrance must enter through the square on the north side.

The square landscape is also designed by UAO. In order to cooperate with the flower and grass pavilion designed by Atelier Deshaus in the square, UAO cut out the original concrete sidewalk of the park square where the trucks are parked, cut out irregular spaces and planted grass in the spaces. It not only echoes the irregular surface of the blocks of the flower and grass pavilion supporting structure, but also retains traces of the plant’s history.

The location of the flower pavilion is on the central axis of the original building, and the entrance to the new ADC art design center building should be from the flower pavilion plaza, so that entry should be from narrow horizontal axis column spacing. ; UAO’s solution is to cut an optical axis in the middle of five-row buildings: open the middle roof with two to three spans (8-12m), remove the tiled roof, and keep the wooden frame （or the frame in steel). After opening the roof, light enters the interior of the building, naturally forming a sequence space; this sequence space is defined as the art avenue of the central axis similar to Raphael’s famous painting “Athens College”, which is the main circulation space, connecting the exhibition halls on both sides, forming a building classic exhibition “fishbone” like an airplane layout.

The partitions of the exhibition hall on either side of the central axis are in red brick. The partial roof of the central axis is opened to form an open atrium; while the steel or wood truss structure at the top is reserved, and the light and shadow of the boot will be cast on the walls on both sides of the main axis during the day.

The design principle of the main entrance to the building is to emphasize the contrast and juxtaposition: the main entrance forms a high-rise shape with a steel structure; its oblique roof shape comes from the first letter a of art. This idea comes from the thought of Li Tao, the chief designer. The first idea is an older symmetrical shape, which later evolved into a square shape. I think it’s too formal, so I change it to hypotenuse and The combination of right angles finally forms a word. The word “a” and the window shapes D and C on the facade form the acronym for “art design center”. The design directly expresses the meaning of the ADC building name with the pop method; although simple, it is straightforward and effective.

The “A” is a newly implanted structural form, which forms a strong contrast in age and material with the original roof and wall retained. The glass skylight at the top of “A” makes the black high-rise space not appear oppressive

As the vestibule of the whole building, the interior space under the A line is darker and the central axis tracking space is brighter due to the removal of the roof, which also entices visitors to explore forward.

In the two exhibition halls, UAO used the characteristics of the trellis structure to hang two light steel boxes with steel cables, covered with a transparent plate, one is white, the other is red; the transparent plate is light and translucent. The bottom of the box hangs floating in the showroom; it not only separates the space, but also does not appear too blocked, thus affecting the whole and the liquidity of the space. This sense of suspension reflects the lightness of the installation, which also contrasts with the historical sense of the original building.

From the sense of the weight of the “A” steel structure at the entrance, to the nature after the roof has been lifted from the central axis, and finally to the sense of the light of the box suspended in the exhibition hall; the light also changes from dark to light and then to semi-artificial light suitable for the showroom. It’s a sort of perceptual sequence that the designer creates on purpose.

The function of the exhibition hall is set to organize various activities, up to 9 m in height, in addition to conventional art and sculpture exhibitions; it was also used by UAO to organize the “China-Holland Urban Revolution Camp” and the “Urban Revolution Practices Exhibition and Forum” organized by clients, which is in line with the ADC (Artistic Design Center) positioning of the building, just as Li Tao, the designer, designed it at the start. The three letters on the facade are also striking and clear.