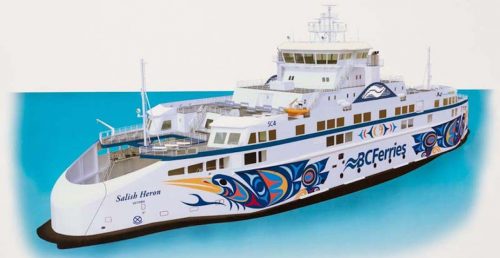 After hosting a competition among the First Nations artist community, a design was selected for the exterior livery and interior art of the Salish Heron, one of BC Ferries’ newest ships.

The design by Maynard Johnny Jr. of the Penelakut First Nation was chosen from a shortlist of nine artists commissioned to create design concepts.

Johnny was among 36 artists who applied and expressed interest, after BC Ferries partnered with the First Peoples’ Cultural Council, which oversaw the design competition on behalf of the ferry company. The initial call for submissions began early this year.

He says his design reflects the long beak and long neck of a great blue heron, as well as its wings, tail feathers, and talons.

“The herons and my people once inhabited the area of ​​what is now known as the city of Chemainus,” Johnny said.

“The majestic birds were once plentiful and provided people with advice on where the fish were in abundance. I created a Salish Heron using a traditional Salish design with contemporary colors that have become my signature as a Coast Salish artist… I wanted to create a Salish Heron that is fascinating to the viewer and obvious to the eye while keeping a flow of design and color. “

Artistic design of the Salish Heron by Maynard Johnny Junior of the Penelakut First Nation. (BC Ferries)

Shortlisted artists received honoraria to further develop their design. As the winning artist, Johnny received a license fee of $ 15,000 for the use of his final design.

The Salish Heron is the fourth vessel in BC Ferries’ new Salish-class mid-capacity vessels, joining the Salish Eagle, Salish Orca and Salish Raven, which entered service in 2017. The first three vessels were also adorned with unique Indigenous works of art.

Each Salish Class ship has a capacity of at least 138 vehicles and up to 600 passengers and crew. They are dual fuel ships, capable of using either liquefied natural gas or diesel.

The Salish Heron will begin operations in 2022, serving the southern Gulf Islands and allowing the withdrawal of the diesel-powered vessel Mayne Queen.

In another update, the latest in a series of six BC Ferries Island-class hybrid electric vessels passed through the Panama Canal on November 18, after leaving Romania’s shipyard on its own for the transatlantic trip on October 11. a vessel serving secondary routes is expected to arrive in British Columbia before the end of 2021.