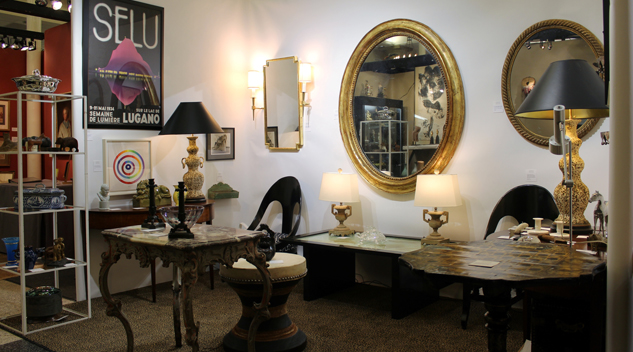 An interesting and eclectic mix of things sparked interest in Andrew Spindler Antiques & Design, Essex, Mass., Which featured a fascinating trio of gilded wood mirrors ranging from 19th century French rope twist to French oval to the geometry of the twentieth century.

“I thought it looked better than ever,” said Andrew Spindler, an antiques and design specialist in Essex, Massachusetts. “Many visitors and clients told me how much they appreciated the quality, variety and relative accessibility of the show, even going so far as to say that they liked it more than the Winter Show! It’s a testament to Brad Reh’s high standards and hard work.

“From the signage to the advertising, everything was great, and his team couldn’t be more helpful. Brad has also put together a group of really nice dealers, which creates a great atmosphere. There have been several new decorative arts dealers who have really helped raise the bar. Attendance was good. Traffic was constant on Friday. Heavy rains on Saturday had some impact, but Sunday was very busy. Overall, I am very grateful.

The show is just a little bigger than it was when it was created five years ago, 33 dealers this year, but it remains an important bridge between dealers and buyers, and is seen as an accessible market and accessible which takes place during Antique Week in New York City. . “This show saved our butt,” said Trifles dealer Matthew Robinson of Wiscasset, Maine. “At a time when many shows are disappearing, this is one of the few remaining shows that offers so much variety at reasonable prices.”

“Our show is unique in that it offers visitors the opportunity to browse and shop for art and antiques on a much smaller scale and in an accessible atmosphere,” said Brad Reh, co-director of the show. His wife and co-manager Vandy Reh said it was “a lovely show, with a great turnout and dealers who walked away happy. The energy was wonderful. Several people tell me that they put it on their calendar. 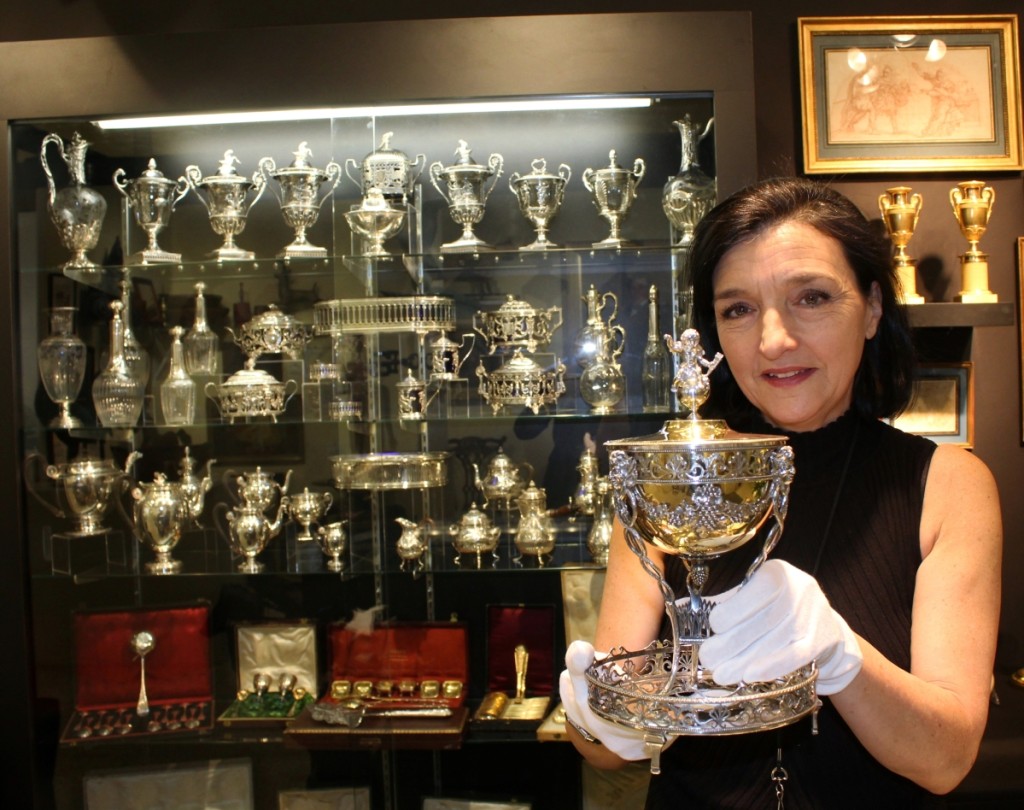 Jasmine Doussière of Silver Art by D&R, Marseille, France, and New York City, holds a rare antique silver and vermeil sugar bowl, or ceremonial sugar bowl, 1810, by Maitre Orfèvre Pierre Bourguignon. Decorated in the Louis XVI style, the piece features a vine garland with three Pan heads, associated with wine and gaiety, and the lid is surmounted by a cupid as a floret. “It was a good show for us,” said Doussier. “We saw a constant flow of customers over the three days.

Booth talks were a new feature in the show’s lineup this year. The 20-minute lectures offered clients the opportunity to learn from experts on a variety of topics, from the collection of decorative car clocks, presented by leading European Decorative Arts exhibitor Scott Defrin, to the silver tableware and French decoration of fine art by Jasmine Doussière from Silver Art by D&R. Ron Bassin of A Bird in Hand was one of the speakers, speaking about the Grenfell rugs on Saturday. He had some excellent examples of this folk art tradition by residents of rural communities in northern Newfoundland and Labrador in his stand, including a rare bench cover, possibly for a piano bench, from the late 1920s to 1930s depicting three polar bears on the ice floe. . “The coloring gives it a very contemporary look,” he observed. Another piece was a mixture of silk and chenille. Entitled “Ambulance Sled,” it was a lively scene of husky dogs pulling a sled and two medics on their way to an apparent emergency.

Always interesting, always eclectic, Andrew Spindler Antiques & Design returned this year with a pleasing array of period furniture, 20th century design, artwork, decorations, lighting and curiosities supporting his conviction. personal beauty comes in many forms. For example, there was a compelling trio of gilded wood mirrors on the wall of his stand that ranged from 19th century French rope twist to an unusually large 19th century French oval with 20th century geometric geometry. “As far as sales are concerned, we were satisfied,” he later noted. “Among other things, we sold a lot of small ones, including a large lion in green enameled English pottery, various carved wooden folk art animal figures, mid-century modern pottery and glass, and a lens glass lighthouse. ” The French 19th century giltwood oval mirror has found a new home, as has a Louis XV period marble top table, a Scottish rosewood pedestal table with a septarian stone top, circa 1830, a pair of lamps in Italian art pottery and a railroad lantern. “After that we got calls and had two more sales of items that people saw at the show,” said the Essex, Massachusetts reseller.

There were some exceptional silver coins this year. Silver Art by D&R, Marseille, France, and New York City, and Greg Pepin, Danish specialist Georg Jensen, gave excellent presentations. At Silver Art by D&R, a piece of choice was a rare antique silver and vermeil sugar bowl, or ceremonial sugar bowl, 1810, by Maitre Orfèvre Pierre Bourguignon. It was decorated in the Louis XVI style, with a vine garland with three heads of Pan, associated with wine and gaiety, and the lid was surmounted by a cupid as a fleuron. “It was a good show for us,” said co-owner Jasmine Doussier. “We saw a constant flow of customers over the three days. We have had loyal customers who have come to buy old drawings and some decorative bronze sculptures by Ferdinand Barbedienne. We also sold several antique French silver pieces, such as lamb chop racks and melon forks from Odiot as well as oyster sets and menu racks. We met quite a few new clients and sold a magnificent silver and Limousin & Souche crystal centerpiece. In short, a beautiful spectacle. “

At Danish-American silver expert Greg Pepin, it was Georg Jensen from A to Z, including a Jensen Art Deco sterling silver pitcher with removable lid and horn handle, designed by Johan Rohde circa 1930. Creator of the Rohde’s iconic Acorn-patterned cutlery, Jensen items combine elements of both Art Nouveau and Art Deco while adding a Bauhaus look, according to the dealer. 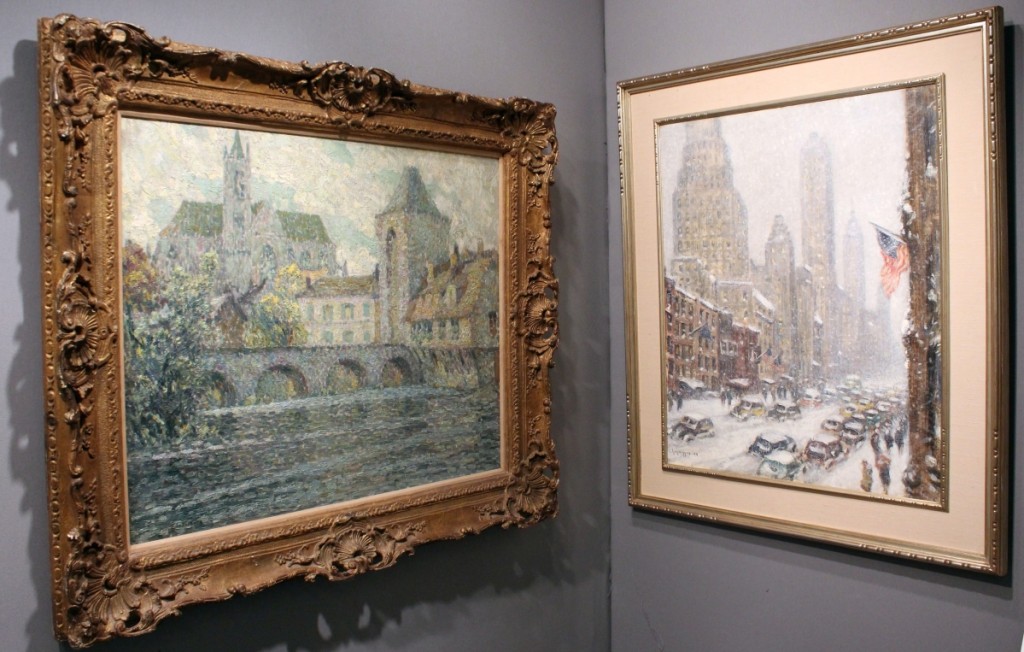 There was a bit of panic from show director Brad Reh just before the show opened on Friday when Austin, Texas, Asian art dealer Lotus Gallery failed to show up. Just in time, however, Jonathan Tung and his team appeared, placing oranges among the items on display at his booth. We have learned that oranges are a popular symbol of good luck during Chinese Lunar New Year, and as being New Years Eve, the fruit has done its part to convey a good result to Tung Gallery. “The show has been a lot stronger this year in terms of dealers and equipment,” Tung said. “Brad always does a great job selecting dealers. And all of the merchants in turn do an incredible job of editing and displaying their items. The result is a wonderfully put together show with something for just about everyone. We have had a good number of our customers from previous years who have stopped by the show, the majority of whom have continued to enrich their collections with purchases from us and other dealers in the show. We also met several new clients and potential clients, ranging from novice collectors to advanced collectors. Overall, we were pleased with the results of the show. Our sales were diverse, ranging from Asian artwork to antiques and jewelry.

Again, Earle D. Vandekar of Knightsbridge, Downingtown, Penn., Was apparently in two places at once during the week. Here at the Wallace Hall show, his wife Deidre Healy represented the company with the usual woolens and botanical prints, Fornasetti items, as well as a quartet of large hand-colored copper engravings of seabirds by Prideaux John Selby, published in Edinburgh and London in 1834. Another interesting thing about the stand was the juxtaposition of two woollens, both depicting the same ship, HMS hero, but by different artists and apparently at different times in the life of the ship, as the smaller representation included a fireplace conversion, Healy pointed out. Paul Vandekar was installed at the Bohemian National Hall to represent the firm at the New York Antique Ceramics Show.